Happy Autumn? Not so fast.

We woke up this morning to the wail of chainsaws. Across the street from our home, city workers were taking down a majestic old maple tree that must have been at least 80 years old.

The reason the workers gave Becky when she inquired was, "we were told to take it down 'cause its damaging the sidewalk". 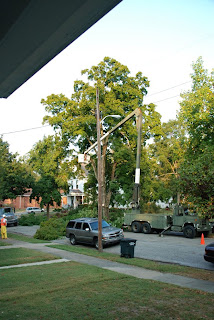 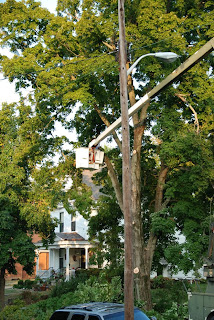 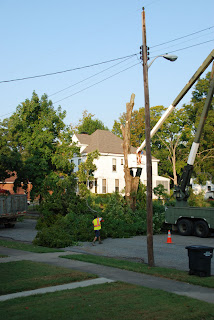 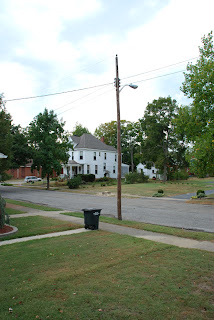 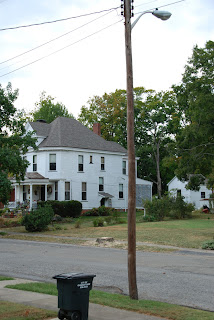 Even in the strongest winds and fiercest ice storms the old girl never lost more than a branch or two. But what Mother Nature in her capricious moods nibbled in healable morsels, man in his hunger for imagined order devoured in whole.

We enjoyed watching that beautiful tree revolve through the seasons since we moved here in July of 1994. It, along with the old historic homes it complimented, was one of the reasons we referred to our little area as a "Ray Bradbury Street". Water Street could perhaps have been some unmentioned side avenue in "The Halloween Tree" or a quiet lane from "Dandelion Wine".

We'll miss the starkness of its bare branches against the winter sky, the soft pale green of its new leaves in spring, the sound of the summer winds moving through its dense foliage, and the fiery orange of its autumn cloak.

No more will its leaves skitter madly through the streets on a windy November day, no more will squadrons of dragonflies hunt above its canopy on a bright August afternoon.

The streetlight will now only have the sterile ground below for its mercury incandescence to illuminate, the leaves and branches that caught and softened the upward shine of its harsh glare hauled off and dumped without ceremony in some overburdened landfill. 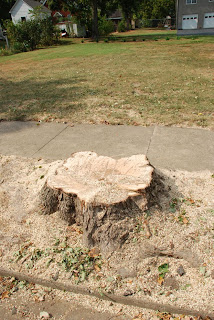 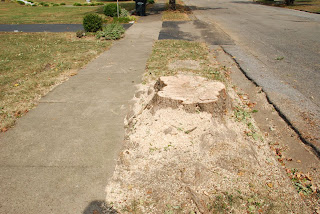 Some might rejoice in the passing of "a messy tree whose leaves clogged the gutters and littered the neighborhood lawns". But there are a few of us who mourn the loss of what could be equated as an old and trusted friend. Today the City of Charlestown may have become closer to model efficiency, but we feel that it has become exponentially colder in heart.

Yes, I'm being melodramatic, but I felt the occasion called for a bit of literary decorum. 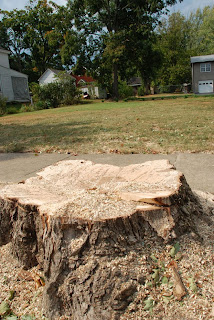 And as summer comes to a close...

I'm busy, busy, busy. I meant to have this blog entry posted by the beginning of September, but better late than never. I can't complain though. It is so nice having a full work schedule.

It was a definitely a"Butterfly" summer. Simon Clark's novella "Butterfly" sold out in a heartbeat. Simon was kind enough to include some of the images I created for his Signature Series book in this wonderful promotional video. The music and photographs are by Alex Clark.


I was once again accorded the honor of working on a Gene O'Neill novel. Coming soon from Bad Moon Books is Gene's novel "DEATHFLASH" Here are the cover and interiors. 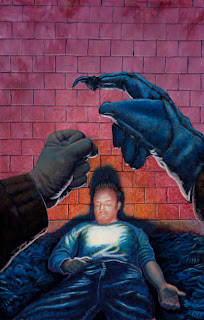 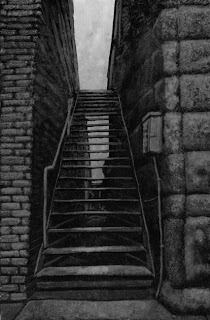 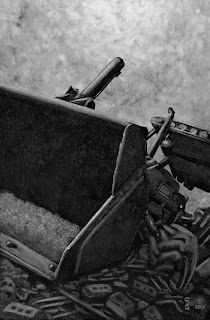 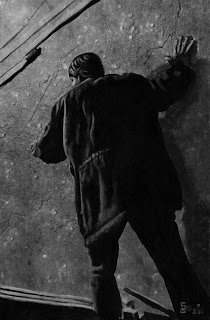 Our final convention of the year was Context 23 . What a blast! Everyone from fellow guests to Context staff were just wonderful. I sold a lot of prints and the original illustration for my latest Chaosium assignment. And the frosting on the cake was that I scored some jobs. I love writer's conventions. 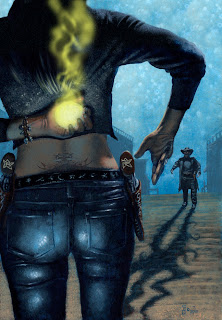 One of the jobs resulted from my highly successful art demo. More about that in a future blog.

On Saturday night during the Shroud Publishing party the Hiram Awards were bestowed. Lo and behold I was given the award for "Unique Juxtaposition in Illustration". Written on the back of the award certificate is " For demonstrating innumerable uses of cogs and fossils in horror art". Uh-oh, this is just going to provoke me to keep painting my mechanized nightmares. 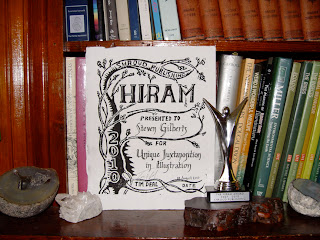 And just in time for the Halloween season is my cover illustration for J. G. Faherty's forthcoming novel " Carnival of Fear" which will be published by by Graveside Books (GravesideBooks.com). It was great fun making J. G.'s vision for his cover a reality, but how can you go wrong with ghouls and ferris wheels. 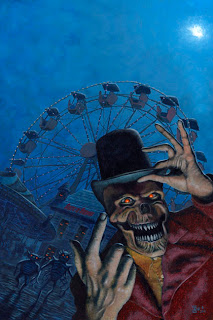