Putting the joy of AT&T aside for a moment, I thought I'd go to my happy place and remind folks about my two upcoming 15 minutes of fame (a whole half hour if you can believe it).

Next week of course I'm Artist Guest of Honor at Mo*Con.

And June 5th thru the 7th will find me as Artist Guest of Honor at Hypericon 5 (DeepSouthCon 47.

Adding color to this blog entry, here are two of my recent cover projects.

I was given the distinction of providing the cover for the summer issue of Space & Time Magazine. There were some very nice comments about my painting in the Editor's Blog. 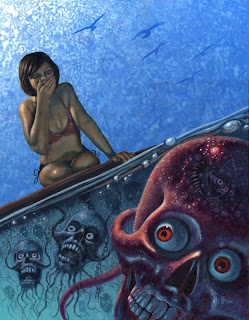 And this is my illustration for the cover of Devil's Marionette by Maurice Broaddus and published by Shroud Publishing. It is a remarkably fascinating and disturbing tale. 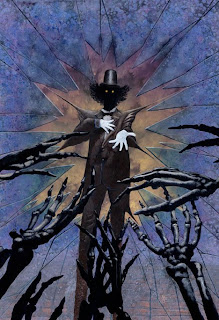 I'll be back to regaling you about my telecommunication woes within short order. The recent turn of events have been nothing less than a journey into the bizarre.
Posted by Steven Gilberts at 5/09/2009 06:35:00 PM No comments:

A Terrible Thing. ATT. Yes, this is a followup to my previous blog about the joy of being a customer of AT&T.

As I've said before, I'm sorry to use my blog as a complaint forum. I prefer to keep my posts on a positive note. But friends have pointed out that it is a good thing to let people know what is going on. Kind of a "duty to warn" situation I suppose.

If you know a copperhead snake is in the backyard you have the responsibility to warn those who might be walking there.

If you have just seen a drunk person urinate in a pool, you have a responsibility to warn the kids that are getting ready to jump in. Right? Though maybe it would depend on if they were the same kids that toilet papered your yard, but I digress.

Anyway, last Friday I received an envelope in the mail for a "Gary Stevens". The name seemed familiar. A neighbor perhaps? The address was ours though. Then I remembered something I'd heard over the phone about a month ago, "the account was opened by Gary Stevens and he must have punched in your phone number by mistake". Residential Email LLC had once again reared their ugly head.

The envelope turned out to be stuffed with items that an email spam filter would block in a second. Viagra advertisements, pyramid schemes, pleas from millionaires from Ethiopia. Unfortunately having no postal spam filter, I suppose I'll have this kind of crap to look forward too from now on. Thanks AT&T.

But this was just the beginning of a delightful weekend. On Saturday our AT&T statement arrived, and as usual it did not disappoint.

Now, the problem with the Residential Email LLC charges had actually been resolved during April after I'd threatened to report AT&T to the proper authorities. Supposedly, we even now had the elusive "Third Party Billing Block" whose existence was spoken of in hushed whispers.

Indeed the the credit for the $14.95 charge shined like a beacon of hope from the statement.

But the Past Due Charge of 35.02 shined even brighter.

Yes, in addition to the current bill we were also being charged the amount for the last statement (sans the 14.95 credit) plus a $7.10 late charge. AT&T was saying that we had not sent them our last payment.

What were we thinking not sending in our payment? How could we do something so vile and despicable to a company whose only thought was to provide us with safe and efficient communications services?

Or perhaps we did send the payment in on time, and there were witnesses?

Be sure to drink your Ovaltine and tune in for the next installment of my adventures with AT&T, The Strange Case of the Purloined Payment.
Posted by Steven Gilberts at 5/06/2009 08:53:00 PM 1 comment:

Dilation Exercise for May 2009

My apologies for skipping the April Dilation Exercise. What a month April was.

So this is the Dilation Exercise for May 2009.

I hope this will be a fun work out for your imagination and I encourage you to participate with comments. If you come back to the blog and can't find this post, look for it in the "Dilation Contest" category.

Please look at the picture and imagine for it a one sentence caption of dialog and a one sentence caption of narrative. Write these down and transmit the sentences to me via the comments option at the bottom of this post. Try to produce captions that compliment the image without overly defining what's going on in the picture. It helps if the captions suggest something beyond the picture plane. For examples of these captioned images and more information about this project and contest, go to Imagination Work Out and Contest. 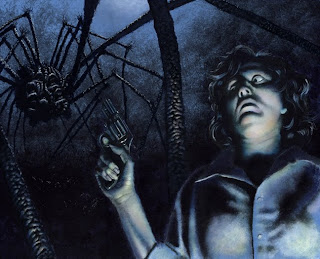 The title of this painting is not important here. More important is what happens in your imagination when you view the image. What's going on here?

As Alan does with his contest, I will choose my favorite of the captions offered for the March '09 Dilation Exercise and declare a winner on or about the 31st of March, 2009. The winner will have the image with his or her caption and name entered into the “Dilation Exercise” album in the coppermine gallery on my web site. The winner will win an 8" x 10" matted print of the contest image. It will be necessary to have the winner's shipping address in order to deliver the print. Sorry, but the print prize will only be delivered to an address within the continental United States.

For examples of captioned images and more information about this project and contest, go to Imagination Work Out and Contest.
Posted by Steven Gilberts at 5/06/2009 08:28:00 AM 6 comments: