Below are the two book covers I had the honor of illustrating for my friend and mentor Alan M. Clark. They were written by Alan, Stephen C. Merritt, and Lorelei Shannon. 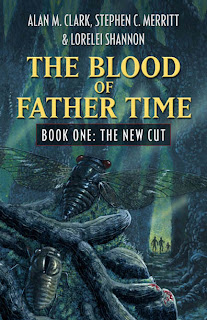 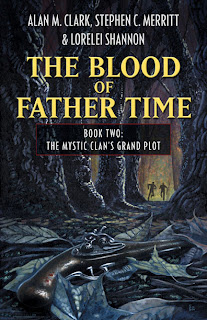 Being asked by Alan to create the cover paintings for his novels is a distinction beyond words and one of the highlights for me of 2006.

I first saw Alan's artwork at RiverCon 20 in the summer of 1995. It was my first convention art show and I was amazed (and quite intimidated) by the work of the four guest artists: Kevin Ward, Mark Maxwell, Debbie Hughes, and Alan. Growing up on a literary diet of science fiction and fantasy provided a point of reference for me in regards to the work of Kevin, Mark and Debbie. But Alan's delightfully macabre illustrations provided a new and wonderful visual experience. The paintings he exhibited were predominantly from the book The Pain Doctors of Suture Self General by the Bovine Smoke Society.

The following January I participated in my first ChattaCon art show in which Alan was also an attending artist. Having been too shy to approach any of the artists ( in particular Alan ) at the RiverCon show, I was not about to let the chance to talk with him slip by again. The polar opposite of his subject matter ( as most horror artists are ), Alan was the model of southern hospitality. He complimented me on my paintings of dinosaurs, fossils and dragons and was more than happy to reveal how he achieved various effects in his own work.

Later when he looked through an illustrated Halloween party invitation that Louisville graphic artist Michael Morris had created and I had co-illustrated, his words were something to the effect of " you should consider going darker with your work".

Alan has been a tremendous source of help and information to me in both art technique and publishing, and without his help I would not be where I am today in the field of horror illustration.

For more information on the Blood of Father Time series please go here
Posted by Steven Gilberts at 1/04/2007 08:01:00 PM No comments: 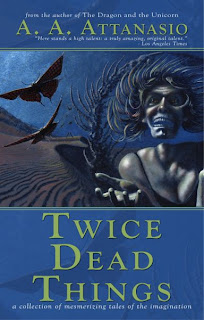