William Jones invited me to post on his blog a short essay about my creation of the cover for High Seas Cthulhu. It can be found in the replies section for the High Seas Cthulhu entry (William's Ramblings).

My professional history with William brings up something which I have stated before, but always bears repeating.

It could be said that my career took off in the spring of 2004. That was when I garnered my first assignment for William and Deborah Jones' magazine The Book of Dark Wisdom (now known as Dark Wisdom).

The exposure I received from having my work appear in Dark Wisdom that year (coupled with my membership at Chad Savage and Alan Clark's spookyART.com) could definitely be considered a launching point for my vocation.

And of course I would not have a Chesley Nomination to my credit if not for my cover illustration for Dark Wisdom issue #8.

So thanks again William, Deborah, Chad, and Alan.

Just for the fun of it, here is my first illustration for Dark Wisdom and below that one of my most recent ones. 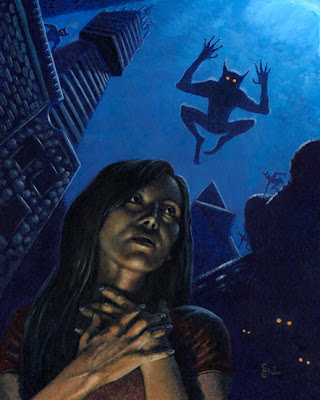