The Academy of Adventure Gaming Arts and Design (AAGAD) and the Game Manufacturers Association (GAMA) recently announced the nominees for the 34th Origins Awards.
Among the nominees in the Publication/Non-fiction category is Frontier Cthulhu, edited by William Jones and published by Chaosium Inc. I had the privilege of illustrating the cover for the collection, and William insists that the cover helped garner the nomination. I won't argue the point any further. :-)

You can read about Frontier Cthulhu here, and a complete list of the 34th Origin Awards nominees can seen here. 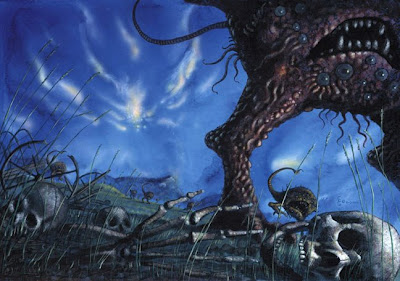