I'll start out on the positive. Necon was wonderful as always. This was our five year anniversary and Necon 29 was every bit as fun as Necon 25. We reunited with old friends, made new friends, and I received great feedback on my paintings. Next year's Necon 30 is going to be like Necon 25 where past Guests of Honor are invited to return, so that will be blast. And there will be some interesting things in store at Necon 31. 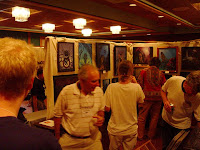 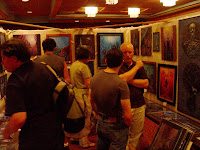 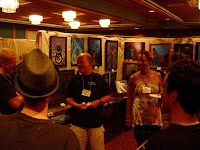 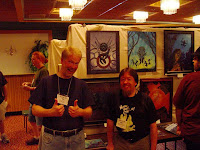 And now to the title of the blog. Since 2006 Becky and I have been driving to New York City for the first day of our Necon journey. We stay at Jill Bauman's apartment overnight and the following day the three of us drive up to Rhode Island. This year was no different in that respect, but what an obstacle course we had to traverse.

There is always road construction of course. It's summer. But this year New Jersey proved to be quite a bear. Bumper to bumper mile upon mile. We finally made it to the George Washington Bridge and thought our troubles were over.

How naive we were.

We went to the upper deck because we thought that would be quicker. When we got to the toll booth the traffic was nearly at a standstill. We crawled through the booth and then came to a complete stop on the other side. Six or seven lanes of traffic was being condensed into three lanes.

There was a solid wall of semi-trucks on either side of us. As we sat there the wall of trucks slowly began to move, right towards us! We were in an automotive trash compactor! As our lives flashed before our eyes I made a desperate crawl towards an opening that suddenly appeared. Somehow we made it through in time and unbelievably the traffic all began to move. The traffic thinned out so abruptly that I wondered if maybe we had been crushed to death (the whole Jacob's Ladder, Owl Creek Bridge thing you know).

We made it to Jill's without too much further trouble. Jill was able to get us a spot right in front of her building. We thought that was great.

During the night the flashing lights of a police car caught our attention. I looked out to see that the constables had stopped a woman for some nefarious traffic violation. Silly New Yorkers always breaking the law. She had pulled in right behind our car. After she pulled away the police car, with its lights shining upon our Hertz rental car, sat. And sat. And sat. Not a wheel budged. We assumed that the gentlemen were simply doing their paperwork for the traffic ticket. Eventually they moved on.

The next morning we got everything packed and ready to go. I had been putting things in the trunk and right rear seat, so it was not until we were ready to go that I saw the envelope sticking out from the drivers door. Ah ha, now I knew why the determined officers had been so long in departing. Miscreant that I am, I had crossed the boundary from law abiding citizen to common criminal. But how you might ask?

It was a parking citation of course. Correction. A $65 parking citation. So I must have been blocking a driveway. No. Perhaps I was blocking a hydrant? No, this was where Jill usually parked. Out of state plates are illegal in New York City? Of course not, but we're getting warmer.

We immediately called the Clarksville office about the problem. The manager told us that we would have to call the 1-800 Hertz Customer Service number. About four hours later as we were nearing our destination in Rhode Island my wife was finally able to talk to a customer service representative. The representative explained that we would have to take the matter up with the office that we had rented the car from. Yes, this is were the story is going.

Despite reassurances by our friends that Hertz would take care of this, I was apprehensive. The specter of our AT&T misadventure still clung to my mind like cat piss odor in carpet (quick side note, when we got home there was yet another junk letter for the mysterious Gary Stevens who seems to reside with us at our address). But as I mulled over the whole situation it became obvious that Hertz would not throw away 14 years of customer loyalty for $65 dollar error on their part.

"Huh, I've never encountered this before and everyone I've talked to is just as baffled. But it is not our fault. We only have to check to make sure the plates are up to date. We get cars from all over the country so we don't know what kind of plate is going to actually be on our cars".

That is what we were told when we returned the car to the Clarksville IN location. The office manager said he would look into the matter and see what he could find out, but consistently reiterated that Hertz was not at fault for what plates are on their cars. I finally had to say "so if it is not the fault of Hertz Car Rental, than you are saying it is our fault". "No no", he said. "It is not your fault, but it is not our fault either. Maybe the police made a mistake".

Thank goodness we had established that nobody except maybe the police were at fault. I could sleep easy now.

But wait a minute, there was still the 2000 lb. $65 parking citation sitting in the room.

Nobody within "The Hertz Corporation, a subsidiary of Hertz Global Holdings, Inc. (NYSE: HTZ), the world's largest general use car rental brand, operating from approximately 8,000 locations in 147 countries worldwide" knew how to handle this problem. It had just never happened before. Ever. Never. Not in the history of all mankind. This just couldn't be. But maybe somehow someway someone within the lofty Hertz hierarchy would deign to call the Clarksville office to answer the burning question, (and maybe even provide the answer to the meaning of life). The manager had me write down my name and phone number on a tiny Post-it note and said he would be in touch.

Now I know it is just $65. You are thinking "you cranky old fart, why not just pay the damn thing and be done with it?". But it is the principle of the situation that is so frustrating. Since 1995 we have been using Hertz. We've never had a problem. But when we did have a problem instead of hearing "Mr. Gilberts, you are a valued customer and we will get this problem resolved" we basically hear, "now that's weird, but it's your problem, not ours".

The citation was not given because I had been using the car in an illegal manner. It was given because the company I trusted to provide us with a safe and legal automobile had in fact not. And we were given absolutely no reason by Hertz as to why they have cars with commercial plates. Obviously there is not any kind of a discount for using a car with them (and obviously it was costing us more to have them).

As we were leaving the office we did finally get a "sorry for the inconvenience this has caused", and later in the day the manager did call us. He said The Hertz Corporation hierarchy was not returning his inquires, but a regional manager had given him permission to deduct the $65 from our rental bill. A quick fix as he put it. Not exactly the response I was looking for, but probably the best we were going to get. I called the manager the following day and inquired if it would be okay if my wife stopped by on her lunch break to get a receipt for the corrected amount. In a dispassionate tone he said that would be fine but we would be receiving a receipt in the mail within a few days.

I did file an online complaint through the Hertz website the same day. Oddly enough they did not respond.

So mind you, I'm quite aware that I'm on a rant. But use my rant for your own benefit. When you are renting a car, check the plates to make sure you don't qualify for a "winning ticket" when you get up the next morning.